Since February 2022 Nigerians in the federal capital Abuja and some states have been enduring petrol scarcity, with regular long queues at petrol stations. The queues have continued despite the budgetary allocation of N4 trillion for fuel subsidy in 2022, which has provoked criticisms. Fuel subsidy, which simply put, is the amount the federal government pays for the difference between the cost of importing petroleum products and the pump price, has been on the increase over the years, despite a regular increase in the price of each litre of refined products.

Petrol subsidy payments grew by 349.42% from N350 billion in 2019 to 1.573 trillion in 2021, driven by the increasing price of crude oil in the international market and the falling value of Naira. In 2020, the cost of subsidizing PMS was N450 billion, whereas, in the year 2022 alone, the total cost of subsidies in January and February was N396.72 billion. The recent data published by the Nigerian National Petroleum Corporation (NNPC) show the federal government approved N4 trillion naira to be spent on petrol subsidies in 2022. This amount is almost half of the N14.4 trillion fuel subsidy between 2006 and 2019. To show how humongous the subsidy is, the defunct Petroleum Product Pricing Regulatory Agency (PPPRA) reported that the government spent the sum of N2.1 trillion in 2011, an increase of ₦1,437.84 trillion from the 2010 payment. It also noted that in 2012, ₦1.35 trillion was paid as subsidy, the highest amount paid until this year’s huge allocation to fuel subsidy. The table below shows the trend of subsidy payments in the last 10 years, from 2012 to 2022. 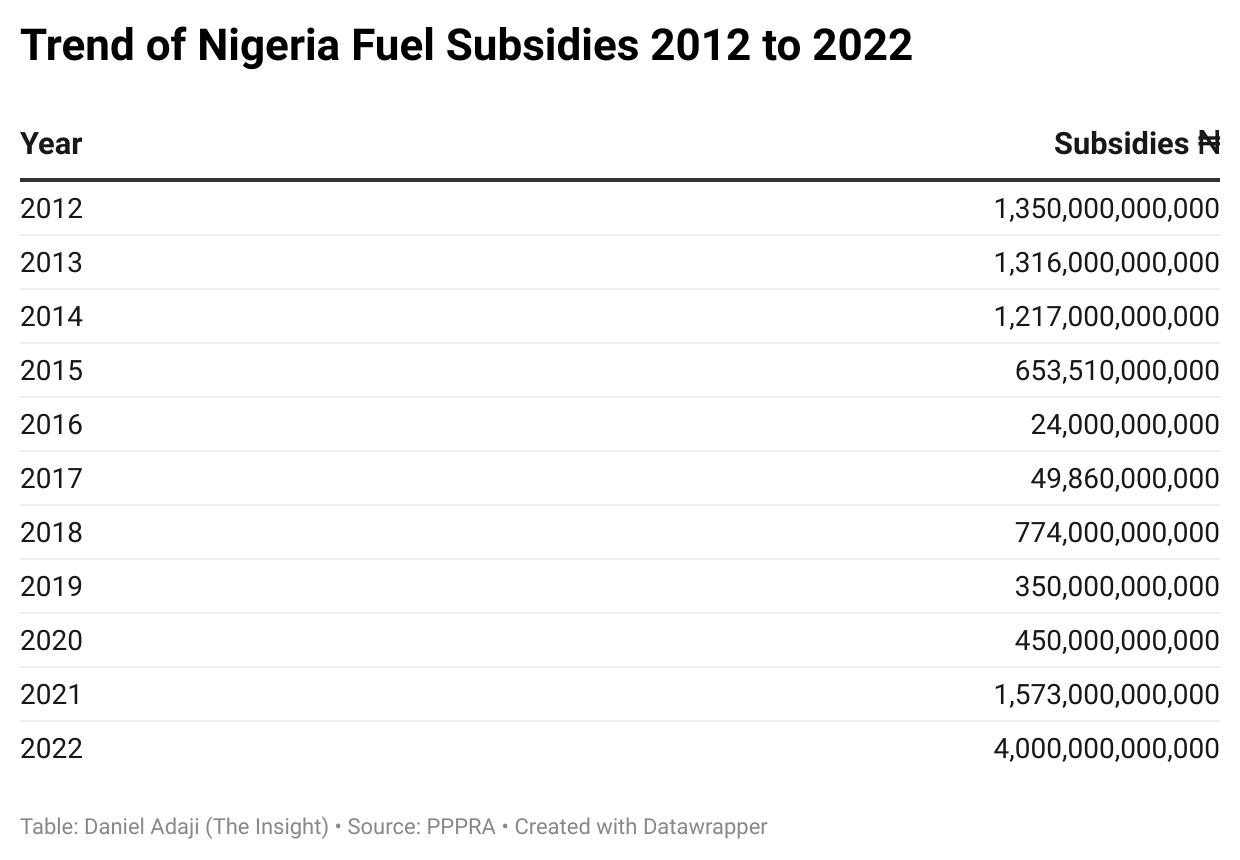 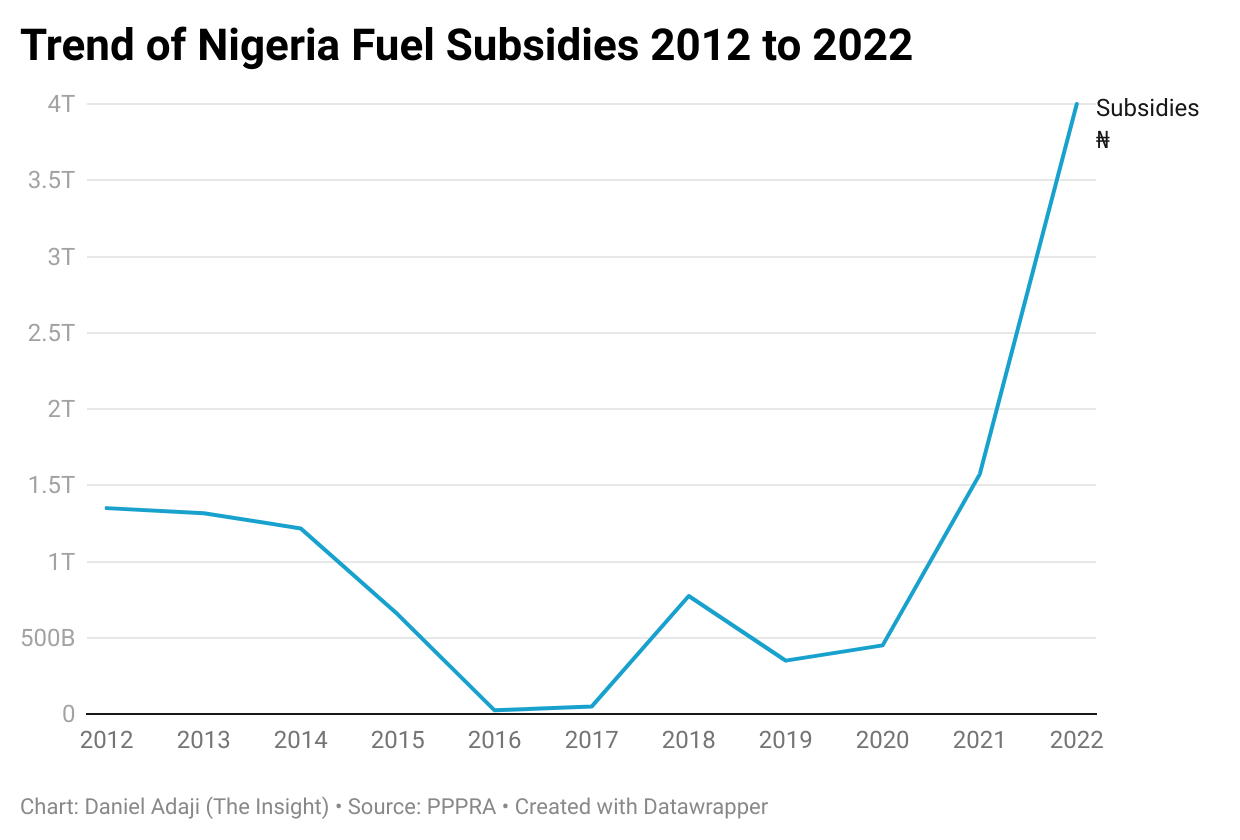 The World Bank, in its recent development update on Nigeria,  noted that less than 3% of the Premium Motor Spirit (PMS) is consumed by those classified as the poorest Nigerians, implying that only the rich are beneficiaries of the subsidies. The president of the World Bank Group, David Malpass, argued that subsidy is expensive for several reasons: “One is that they are expensive because they go to everyone and they are often used by people with upper incomes than by people with lower incomes so they are not targeted.  So, we encourage that when there is need for subsidy, either food or for fuel, that it should be carefully targeted at those most in need of it. And so, we have encouraged Nigeria to rethink its subsidy effort.”

The increase in fuel subsidy payments between 2020 and 2022 is worrisome. An oil and gas data expert, Adejoke Akinbode of BudgIT, told The Insight that  “the greater the increase in the price of crude oil, the more money the government needs to subsidize the price of PMS at the pump to ensure Nigerians could afford to buy one litre of PMS  at N165. Nigerians bought PMS at N165 per litre when a barrel of crude oil sold for $45 and Nigerians still buy the product at N165  per litre, even when the crude oil goes up to $112 per barrel.”

Fuel subsidies were first introduced in the 1970s as a response to the oil price shock in 1973 and since then, the government has been making efforts to remove the subsidies and each attempt has been greeted with nationwide protest.

Adejoke also stated that the price of petrol at the pump is determined by the global price of crude oil. When the price of crude oil goes up, the price of its refined constituents, including petrol, diesel and kerosene also increases. “Currently Nigeria has no single functioning refinery, hence, it imports 100% of PMS consumed in-country. Despite the fact that oil price increases and falls periodically, the price of PMS remains set at N165, so the federal government needs to subsidize the petrol price.”

She also stated that Nigeria could not afford subsidy payments for too long, noting that, NNPC has defaulted in remitting oil revenue to the federation account on grounds of subsidy payments. This she said has drastically reduced the share of federation revenues that go to the sub-national units. Adejoke explained further that “Nigeria isn’t currently raising enough revenues to even pay for subsidy, not to talk of other recurrent debt, recurrent non-debt, and capital investment obligations. While there are justifiable concerns bordering on the inflation of actual volume of fuel consumed daily, the fact remains that petroleum subsidy payments have crowded out needed investment in critical social and physical infrastructure and crippled service delivery.”

Reacting to how Nigeria can come out of the subsidy regime, Adejoke said “a few things need to happen before Nigerians will agree with this policy shift. Nigerians don’t trust the government to utilize the savings from subsidies in implementing programmes and projects that will be beneficial to them. The federal government budget needs to reflect the aspirations of Nigerians and address its myriad developmental challenges. Also, accountability is very key. Persons who have mismanaged, pilfered and embezzled the nation’s scarce resources need to be brought to book. There are several cases of corruption that are yet to be prosecuted. Thirdly, Nigerians need to see a functioning local refinery. Once we have the aforementioned in place, people might now begin to listen to reasons why subsidy needs to go.”

It is not clear what steps government would take to clear the long queues at petrol stations and how to continue to pay or exit the excruciating subsidy regime.

Fuel subsidies were first introduced in the 1970s as a response to the oil price shock in 1973 and since then, the government has been making efforts to remove the subsidies and each attempt has been greeted with nationwide protest. Finance Minister Zainab Ahmed has admitted that fuel subsidy was widening the government deficit gap so much that it was considering tapping into the two billion Euros it raised at the Eurobond sale last year to support its fiscal positions.  The Minister blamed Russia’s war on Ukraine for the hike in fuel prices and said the country would need to increase local borrowing in order to meet up with the demand for subsidies. “Rising oil price has put us in a very precarious position because we are importing refined products and it means that subsidy cost is really increasing.”

Although the minister said she was optimistic that the recent development in the oil sector, such as the Petroleum Industry Act (PIA) 2021, the full reactivation of the four refineries in the country and the three private refineries under construction in 2022, would significantly boost contribution from the oil sector to economic growth, it is unsure whether the strategy would leave Nigerians any better in terms of increasing cost of PMS.

Available data revealed that the amount spent on fuel subsidies is increasing yet PMS is relatively expensive. Nigerians have continued to oppose the removal of fuel subsidies despite the promise to give monthly transport stipends to the poorest Nigerians.  The National Association of Nigerian Students (NANS) has warned the federal government not to implement the planned subsidy removal.  The Nigeria Labour Congress threat to embark on a nationwide strike should the government implement fuel subsidy removal in 2022.

Finance Minister Ahmed announced the removal of the fuel subsidy and replaced it with a N5,000  monthly transportation grant for the poorest Nigerians.

She made this disclosure at the lunch of World Bank Nigeria Development Update (NDU), explaining that the grant was to benefit about 30 to 40 million Nigerians who constitute the poorest population of the country. However, the exact amount would be determined by available resources. What shall happen to the other population of the poorest Nigerians in the event of resource shortfall is unknown, as she argued that “the subsidies required in the oil sector remained unsustainable. We are working with partners on measures to cushion the potential negative impact of the removal of the subsidies on the most vulnerable at the bottom of the 40% of the population. One of such measures would be to institute a monthly transportation subsidy in the form of cash transfer of N5,000  to between 30 to 40 million Nigerians.”

Though the government had, 2021, promised to do away with the subsidy by 2022, it rescinded that decision in February. It is, therefore, not clear what steps government would take to clear the long queues at petrol stations and how to continue to pay or exit the excruciating subsidy regime.

The News Agency of Nigeria (NAN) reports that the National Sports Association for Judiciary (NASAJ) would hold from Aug. 17 to 27 in Lokoja.

Ariwoola, who was represented by the state Acting Chief Judge, Josiah Majebi, unveiled the trophy at the premises of the State High Court, on Wednesday in Lokoja,

The CJN described the trophy as a ‘trophy of unity’ designed to foster unity among the judiciary staffers across the federation.

The CJN commended Gov. Yahaya Bello for hosting the competition and for the security and hospitality enjoyed by the participants.

He encouraged the organisers and participants to play by the rules and regulations of the game, so as to achieve the desired success.

The President of NASAJ, Emeka Ndilli, said the competition was founded in 1994 while Kogi hosted in 2016 and now in 2022 within the space of six years.

Ndili expressed gratitude to the good people of the state for their hospitality and the Governor for accepting to host the games within a few years interval.

On his part, the state’s Commissioner for Sports, Idris Musa, appreciated NASAJ for considering the state for hosting the games in 2016 and 2022.

He assured participants of good hospitality from the good people of Kogi, adding that the state was safe. (NAN)